What is Vibration Energy Harvesting (VEH)?

Energy harvesting, also known as energy scavenging, is a process by which energy is extracted from the surrounding environment for the purpose of powering small, stand-alone, digital logic devices.  Energy harvesting generally entails small scale applications–on the order of 10-10,000 μW/cm^3–providing onboard power for wireless sensor nodes.  In these applications a physical wiring scheme defeats the purpose of wireless digital logic, and a finite energy sources (such as a battery) sets a significant limitation on the achievable lifetime of the sensor.  From this, there is a clear demand for a power source with a lifetime similar to that of the expected lifetime of the electronic subsystem that it powers–a demand which which the field of energy harvesting aims to meet.

Energy can be harvested from multiple sources.  Some commonly discussed are solar energy, acoustic noise, ambient vibration, temperature variation/gradients, and even human power.  Due to the wide variance in application environments, power demands, and other associated functional requirements, its unlikely that a single solution will satisfy all demands; however, the power available from ambient mechanical vibration clean, nearly omnipresent, and has been shown to be of use for low-power sensors.  This type of energy harvesting, formally called, vibration energy harvesting (VEH) represents a highly desirable option for energy scavenging purposes, and is the primary concern of this research.

As first proposed by Williams and Yates in [1], VEH systems can be reasonably-well modeled by a mass-spring-damper, lumped parameter model.  This allows designers to analyze these systems with the analytical ‘tools’ from the large body of study of second-order dynamical systems.  Experimental VEH systems often consist of a proof mass attached to a cantilevered beam as shown. 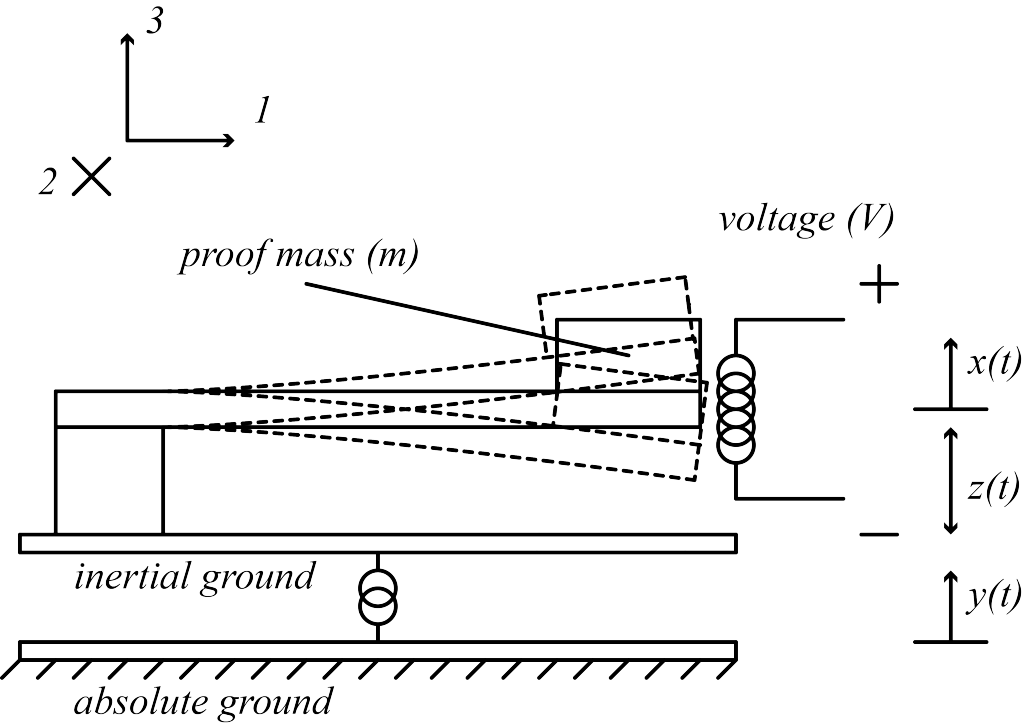 As input vibrations perpetuate the system, the proof mass oscillates relative to an inertial ground–the energy from this mechanical motion is converted into electricity through an electromechanical transducer, which can then be stored in a battery or capacitor.  As the lumped parameters of the system (mass, stiffness and damping) are varied, the response of the harvester will change.  The study of VEH can be generally summarized by designing harvesting systems in a way which maximizes the power output for a given vibratory input.

Projects and Areas of Study